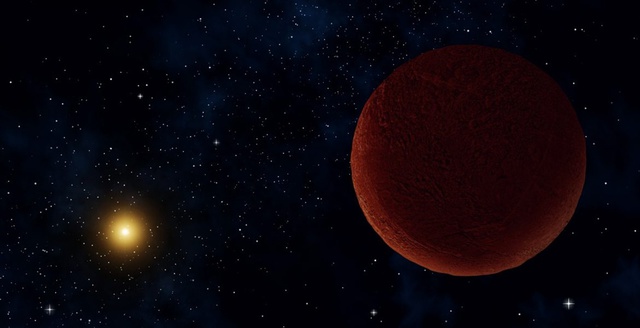 Some amazing new details have been collected about trans-Neptunian Object (TNO) 2014 UZ224, otherwise known as “DeeDee” which is short for “Distant Dwarf”. DeeDee is the second farthest known TNO in the Kuiper Belt that has a known orbit. But until this study, very little other information was known about it.
Using the Atacama Large Millimetre/Sub-millimetre Array (ALMA) astronomers have managed to determine that DeeDee is about 635 km (394 miles) across and that its mass means that it should, at least in theory, be spherical. That last bit is crucial as it is one of the criteria for determining if DeeDee is a dwarf planet. DeeDee is currently 92AU from Earth (1 AU is the mean distance from Earth to the Sun or roughly 150 000 000 km), a mind-bending 1.38x1010 km (that’s 13 800 000 000 km!). The astronomers also used the ALMA data to determine that DeeDee is cold (around -243 degrees C) and not very reflective, only reflecting about 13% of the sunlight that hits it.