Another Milestone in the Search for Extraterrestrial Life Reached 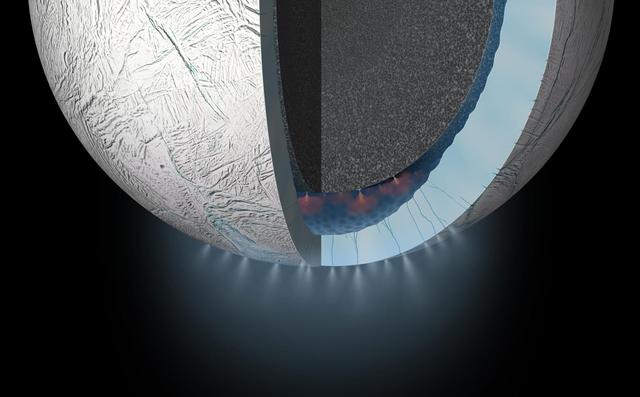 Probably this month’s biggest news story is the revelation that scientists have found hydrogen in the plume of material spewing from Enceladus, one of Saturn’s moons. Data from the Cassini spacecraft indicates that the best fit explanation for this hydrogen is chemical reactions between the moon’s rocky core and warm sub-surface oceans. This discovery could very well indicate that the floor of Enceladus’s ocean includes hydrothermal vents similar to those found in the depths of Earth’s oceans.
"Hydrogen is a source of chemical energy for microbes that live in the Earth's oceans near hydrothermal vents," said SwRI's (Southwest Research Institute) Dr. Hunter Waite, principal investigator of Cassini's Ion Neutral Mass Spectrometer (INMS). "Our results indicate the same chemical energy source is present in the ocean of Enceladus. We have not found evidence of the presence of microbial life in the ocean of Enceladus, but the discovery of hydrogen gas and the evidence for ongoing hydrothermal activity offer a tantalizing suggestion that habitable conditions could exist beneath the moon's icy crust."
On Earth’s ocean floor hydrothermal vents allow unique ecosystems teeming with unusual life to proliferate. Microbes that convert mineral-laden fluid into metabolic energy make these ecosystems possible. "The amount of molecular hydrogen we detected is high enough to support microbes similar to those that live near hydrothermal vents on Earth," said SwRI's Dr. Christopher Glein, a co-author on the paper and a pioneer of extraterrestrial chemical oceanography. "If similar organisms are present in Enceladus, they could 'burn' the hydrogen to obtain energy for chemosynthesis, which could conceivably serve as a foundation for a larger ecosystem."